The Interreg Program V-A Spain-France-Andorra (POCTEFA) is a European program for cross-border cooperation in the Spain-France-Andorra frontier. The program’s aim is to give financial support to European projects thanks to the European Regional Development Fund (ERDF). This support allows to reinforce the economic and social integration of the area and to promote sustainable development.

The program improves the life of the population living in the cross-border area. One of the stakes is to enhance local, regional or interregional strategies to a cross-border scale by fostering exchanges and common knowledge. The financed projects are acting on both sides of the frontier and are preserving the territory resources.

The program’s managing authority is the Working Community of the Pyrenees (CTP in Spanish and French) and includes 7 members: two French regions (Nouvelle-Aquitaine and Occitanie), four Spanish communities (Aragon, Navarra, Catalunya, Euskadi) and Andorra. The surface of the territory is 115.583 km2 with more than 15 million inhabitants.

The cooperation zone unites these areas :

All these areas are eligible-except for Andorra which is not a UE member-  to receive ERDF . 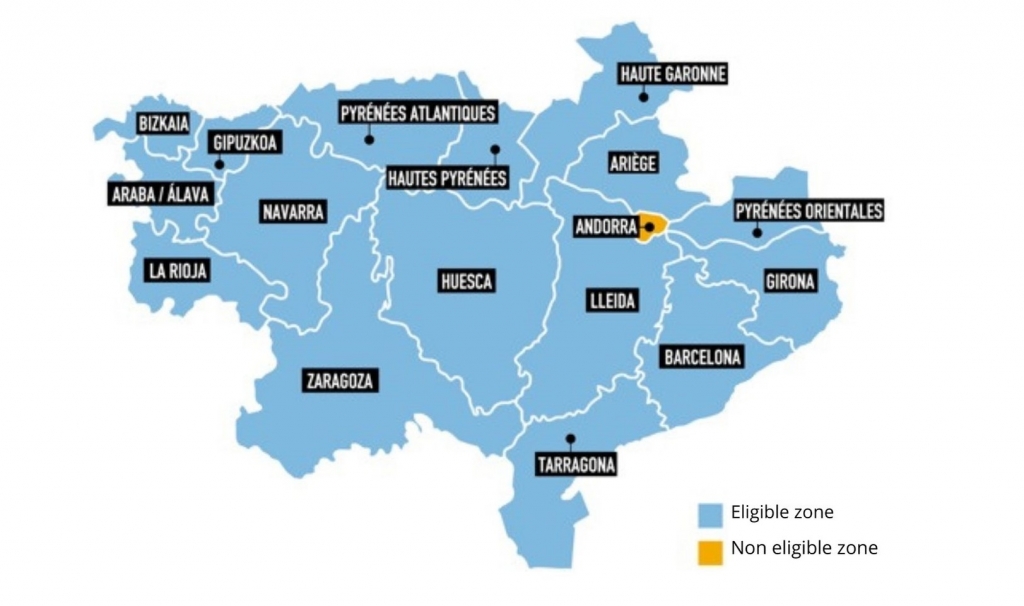 173 projects have been programmed for the 2014-2020 period for a global budget of 173 million Euros. A programmed project can receive a funding of 65% of its total budget. This European financial support offers new opportunities for cooperation between institutions and agents from both sides of the Pyrenees.

The program is organized in calls for projects. During a call, the actors of the territory interested in developing cross-border projects that fall into the cooperation zone must submit their candidatures to the Program. Once presented, the Program managing authority chooses the projects that suit the requirements of the territory and the proposal criteria. These projects will then be programmed and would be eligible for co-financing from the ERDF.

The program is also organized in 5 Axis: